No reviews yet! Be the first to write the review & earn 10 points. 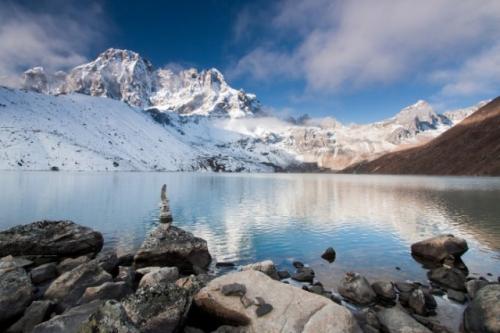 The Nepal Himalayas are best seen on this trek as one traces the main route through the Khumbu region from the Sherpa town of Namche Bazaar. The trekkers get a close view of the world's greatest mountain ranges including Mt. Everest and other himalayan peaks. Also, we visit the famous Gokyo Lakes and cross the Cho -la Pass (5040 m).

B. Rivers: Bhote Kosi and Arun.

D. Forests: Of Rhododendron and Pine.

Day 01: The flight from Kathmandu to Lukla (2880m) with snowline of the Himalayan Range in the north and the rugged landing in Lukla airport is said to be one of the most spectacular flight in the world. After a short break the trek starts by following the trail leading northwest which ultimately descends to the river at Phakding (2652m).

Day 02: Namche Bazaar (3447 m). We follow the Bhote Koshi through the forest and pasture land, passing through small Sherpa settlements, crossing the Bhote Koshi and some steep climbs we reach the large Sherpa village of Namche Bazaar. Near the half way point, view of Everest ( 8848 m) and Lhotse (8511 m) come into sight. This prosperous town is largest in Khumbu. Mt. Thamserku ( 6648 m) and Kwangde Ri (6624 m) loom along the east and west of the village. The sacred mountain Khumbila (5707 m) dominates the skyline along the west. Duration of trek- 6 hours.

Day 03: To assist with the process of acclimatization, a day is spent in Namche visiting the surrounding areas.

Day 04: Thame (3801 m). Traverse westward with view of Kwangde (6343 m) and the waterfall cascading off its flanks. Follow the Bhote Kosi river as the sidehills high on its bank through the red and yellow rhododendron forest (in full blossom in May). Cross the river and look down the valley for the view of Mt.Thamserku ( 6648 m) and Kusum Kanguru (6370 m). Climb up to the village of Thame through the forest. Secluded village the birth place of Tenzing Norgay the first Sherpa to climb the Mount Everest. - 6 hours.

Day 05: Khumjung (3791 m). Walk back down the valley by the way of Thamo, a hill side nunnery. Take the high trail which by- passes the Namche and drops into Khumjung. This is one of the most beautiful village in the Khumbu. The duration of trek - 6 hours.

Day 06: Dole (4040 m). The trail leads down past the school and the Khumjung village before dropping into the rhododendron scrub forest and then towards an impregnable looking rock wall on the north side of the valley. A gaint's causeway of the granite step makes incredible route up the face before the trail emerges the high grazing ground. One hour futher is a charming chorten, from here you can tha magnificient view of the Ama Dablam (6856m), Kangtega (6685m) and Thamserku (6648m) standing high above the meadows of the Thyangboche monastery. The trail drops quickly nearly all the way to the Dodh Kosi before leaving the route to Phortse. There is a good lunch spot set among the birch and rhododendron. The camp spot at Dole is reached after a stiff but attractive climb. Trek duration 6 hr.

Day 08: Gokyo Lake (4750m) A steady plod soon leads to the first of the Gokyo lakes and then to the main lake before reaching the camping ground for lunch. Note : Both the seventh and the eight day are short trek days in order to get acclimatised with the altitude one is gaining.

the foot of Gokyo Ri lies five minutes away from the stream the feeds the Gokyo Lake.

After two to three hours "huff and puff" you reach the summit not to be disappointed for your effort at all, as the views from here are well worth the effort you put in. Everest (8848m), showing more of it's northern flank than from Kala Pattar, with Makalu (8475m) futher to the east and Cho Oyu (8153m) towards the north make a mesmerizing view to watch. Return back to Gokyo Ri after spending a wonderful break at the summit.

Day 10: Above Chyugima (5040 m) The trail initially leads back south before leaving the main route, a short climb leads to the crossing of the jumbled moraine of the Ngo Zumba Glacier. Lunch at Dragnag. This hard scrabling country offers various equally demanding routes until you reach the camp site tucked in below the pass. Duration of trek 5 1/2 hr.

Day 11: Dzongla (4843 m). An early start is recommended. The route lies over the large, uncomfortable broken and scree before starting up the slab rock of the pass itself. Depending on the time of the year the the route to the summit snow field of the Chyugima La pass (5240m) may or may not be covered by snow. The decent starts gently before steeping down. The broken ground route leads to the few stone huts, that makes up the Dzong La.duration of trek 4 1/2 hr.

Day 12: Lobuche (4931 m). An ill- defined track traverses across to join the main trail coming up from Pheriche. On the way you can watch the beautiful view of the Mt. Cholatese (6442m) back on the west side of the route. A steep ascend leads to the terminal moraine of the Khumbu Glacier. The stark and the rugged beauty creates almost a moonscape. The campsite at Lobuche is suitated at the wind swept valley with the enchanting views of the Tawatse (6501m) and Nuptse (7855m).

Day 13: Kala Pattar (5545 m) and Back. Early start is a must. Travel along the Khumbu Glacier through the jumbled moraines and scattered rocks. The climb to the Kala Pattar though tough is well worth it as the views from the is hearth taking. The Gaints of the earth are all around you, Pumori (7145m), Everest, The China's peak Changtse (7553m), Nuptse(7855m),Lhotse(8516m) Ama Dablam and many other peaks.

Day 14: Dingboche (4350 m). The route passing through the moraines gradually loses altitude before reaching the windswept village of Pheriche. Here, the Himalayan Rescue Association (HRA) has its Aid Post.

A climb over the ridge past Chortens and Main walls you reach the Chukung valley and the prosperous village of Dingboche. This village with their own irrigation scheme, is probably the place at higest altitude to grow crops.

during the rest of the year this huts are run as tea house for trekkers. The path from Dingboche is ill- defined but follows the main line of the valley ascending gently towards the Ama Dablam to the high ridge leading to the difficult Amphu Labtse Pass (5780m) on the right and the massive flank of the Nuptse (7890m) on the left.

It takes two hours from Dingboche to reach Chukung and an early start would allow plenty of time to get a clear view of the famous south face of Lhotse (8501m) towards the north and the Island Peak (6189m) the most famous peak among the trekkers on the east end of the valley.

Day 16: Thyangboche (3867m) Having been consistenly at high altitude above 4200m most trekkers welcome the thought of returning to warmer, softer climbs and the days walk to Thyangboche is a delightful way of doing so. The route starts back to Dingboche and through the long walled paths of the village, and a gradual ascent along the flanks of the hills below the village before a steep drop to the Dodh Koshi. A little futher the route joins the main trail coming from Pheriche. The route then passes through the village of Pangboche(3985m). Out here the Scalp of the Yeti which travelled the world in the 60's is housed in the monstery high on the hill side. The monastery lies more on the route to Phortse and is not easily reached from the lower trail. A spectacular little bridge over the river leads into the fir and rhododendron forest and a lovely afternoon's walk with a short climb before reaching Thyangboche. The duration of trek is 6 hrs.

Day 17: Thyangboche, rest day. The hard work of the trek being over now you can spend the visiting the Monastery, this is the traditional place where all Everest Expeditions receive their blessings as they walk in towards the base camp. It is a classic setting with superb views back up the valley to the Ama Dablam, and the Evetrest poking its south west face over the huge ridgeline linking Nuptse and the Lhotse. At the rear is the beautiful west face of the Tamserku (6608m) and Kang Taiga (6685m).

Day 18: Namche Bazaar, The decent to the Imja Khola and the small village of Phunki (3250m) with its water powered Prayer Wheels takes about one and half hour. The original bridge built by Sir Edmund Hillary was washed away when a flood caused by the land side from the Ama Dablam caused a flooding in this region. Cross the river over the smaller bridge and start the climb towards Khumjung. As the gradient lessens there are many beautiful lunch spots. After lunch start the trek towards Namche by following the path round the eastern flanks of the hills. At the rear is the beautiful west face of the Thamserku (6608m) and Kang Taiga (6685m).

Day 19: A long days walk back to Lukla passing through the village of Phakding. In the evening the Sherpa boys will prepare special farewell dinner.

In the Above Cost It Includes:
1. Airport Pick-up and Drop Off with Private Transportation.
2. Licensed and trained trekking guides,
3. Potters for carrying goods and supplies,
4. Hotel in Pokhara.

5. All accommodation during the trek.
6. Transportation to and from trail head by Tourist Transportation- Not Private
7. All necessary documents and permits for trekking (where applicable)
8. National Park/Conservation Area entry Permit, Insurance,
9. Coordination of quick Rescue service (Costs covered by your Insurance Plan)
10. Trekking staffs wages etc.
12. Welcome Dinner in a Nepali Cultural Restaurant.
13. Meal on full board (breakfast, lunch, dinner, tea & coffee) basis during the trek

14. 1 hr. trekking massage after your trek in Kathmandu.


Services and Cost Does not Included in Price:
1. International Airfares,
2. Travel/Trekking Insurance,
3. Excess baggage charges More than 16kg and hand bag more than 5 kg in
domestic flights.
4. Visa fees.
5. Airport Departure Taxes.
6. Drinks (Cold and Alcoholic) Rescue charge.
7. Tips for The staffs.
8. Expenses of Personnel nature and Permit and Liaison officer fee (where Applicable.
9. Meals during stay in the Kathmandu.
10. Hotel in Kathmandu,Lukla,Pokhara and other destinations.

Do you need more information about Everest Gokyo Trek

When you do online shopping in Nepal through NepBay, you are guaranteed about the nature of the items you're purchasing. Whether it is Online shopping for shoes or electronics, together with our verified images, we guarantee to deliver just fresh, unique items with the bill, and at costs that will make you screech with bliss! In case you're still reluctant about online payment system in Nepal, you could decide on the Cash-on-Delivery strategy, and acquire no additional charges. Imagine that you enjoyed a couple of bed sheets, pants and clothes on NepBay; the value, shading, everything was to your preferring, and you purchased it in a split of seconds!